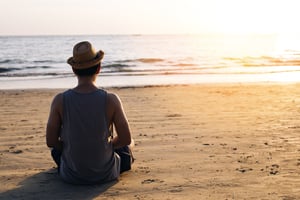 I’m a meditation dropout.  As much as I wish I was able to embrace this worthy practice and quiet my mind, I’ve been running a failure rate of 100% for all attempts.

2019 was supposed to be the year I busted through the slump.  I certainly started out optimistic as I purchased and began Mindfulness: An Eight-Week Plan For Finding Peace In a Frantic World.  I made it to Week One and then things promptly fell apart.  Life happened and since I wasn’t experiencing the time/effort payoff, the mindfulness book found its way to the island of lost toys to die.  It was greeted by many other fleeting past interests of mine, like container gardening, sewing, and self-directed Iyengar yoga (shout out to Chagrin Yoga… much gratitude to all of you for being the only way I could get myself to do yoga!).  You get the idea.

So, it was with a substantial amount of skepticism and a side order of failed attempts that I tried my first NuCalm session.  The advertising boasted, “A neuroscience platform technology that naturally induces deep relaxation and recovery, without drugs”.  It sounded good and I liked the idea that NuCalm was going to do all the heavy lifting associated with this effort.  So I carved out a little time to try it while on a trip to New York City--and the following is what happened.

I found my way to the second floor of a nondescript building at 30th & 7th to a wellness studio where I had booked an appointment for NuCalm.  I checked in and was then shown to a zero-gravity chair, a recliner where your body weight is evenly distributed across the chair promoting a deeper relaxation.  My lower back promptly sent me a thank you note for bringing it to that chair.

Then, the studio staff member explained what would happen next and followed that up with some science commentary around various brain structures.  Once “amygdala” and “adrenocorticotroic hormones” were introduced to the conversation, I started losing focus and began ruminating on why this young man wasn’t at school since he looked about 12 years old, and by the way, when had I gotten so old?  I offer this up as Exhibit A on exactly why I needed NuCalm: To quiet the chatter in my mind and stay planted firmly in the moment.

Next up, he placed two sensors at the base of my skull that emitted a minor electrical pulse that had a slight tingling.  Add some noise canceling headphones, a NuCalm blackout eye-mask, and I was ready.  The meditation music started as he put a weighted blanket over me.  I remember the dialogue in my head starting through its normal running list of things I needed to do, and then… nothing.  Literally nothing.  I wasn’t exactly asleep, but I wasn’t awake either.

The next thing I knew, I was being gently roused.  I felt like I had become one with the zero-gravity chair.  In fact, I was certain the weighted blanket and the chair had been in cahoots, creating this beautiful cocoon of relaxation I had sunken into.  The staff member told me to get up slowly (which was no problem since there was no chance of my body doing anything else), and have some water, which he had thoughtfully placed next to me.

I felt rested, restored and relaxed, as if I’d taken a glorious nap on the perfect sofa.  My chattering mind was quiet and calm.  I was simultaneously energized and at peace.  Glorious.  Even though I was a meditation dropout, I never turned back and am now a NuCalm super star.  To help relax your mind, give it a try!

Fall is a time of change. Many of those...

The Event Prep Timeline – Plan Ahead to Look and Feel Your Best!

It’s been referred to as “the great...

Restoring Balance to Your Nervous System

"You know what the top five most...

Fall is a time of change. Many of those...

The Event Prep Timeline – Plan Ahead to Look and Feel Your Best!

It’s been referred to as “the great...

Restoring Balance to Your Nervous System

"You know what the top five most...