How is Cryo T-Shock Different From Other Cryotherapies? 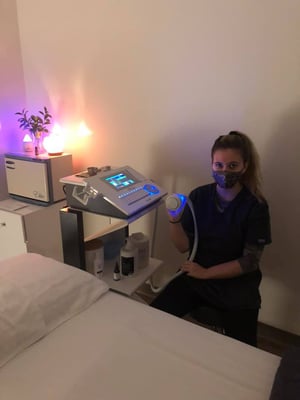 You may be wondering what exactly is Cryo T-shock and what makes it different from cryotherapy. Cryo, or cold therapy, is one of the simplest and oldest methods of treating injuries. Cryotherapy has been used for decades in sports medicine to help treat soft tissue injuries, reduce swelling, and relieve pain. In recent years, the benefits of cryotherapy have led it to develop into so much more than an ice pack on a sprained ankle. You may have seen a professional athlete in an unbelievably cold cryo-chamber, or you might have received a cold treatment administered by a physical therapist or chiropractor. Maybe you’ve seen someone taking an ice plunge in a frozen lake. These are all examples of cryotherapy.

Cryotherapy alone, while proven effective in pain relief and recovery, is incapable of reducing fat and cellulite and toning skin. It is the dual action of cryo and thermal applications that allows the Cryo T-shock to treat cosmetic conditions effectively, painlessly, and naturally.

The unique pairing of hot and cold makes Cryo T-shock unmatched by other non-surgical cosmetic treatment modalities. CoolSculpting is the most comparable treatment on the market, but because it is limited to cold application only, it falls short of what the Cryo T-shock can do. CoolSculpting treatments are limited to fat freezing in certain areas of the body and can be quite uncomfortable. Unlike CoolSculpting, the thermal power of the Cryo T-shock system gives it the power to treat any part of the body. It also increases effectiveness not only for fat removal but also on wrinkles and cellulite, and is in most cases a relaxing experience.

So why is this hot and cold treatment method so much more effective than cryo alone? The pairing of the thermal and cryo components of the Cryo T-shock system induces lipolysis, which is the destruction of fat cells. When lipolysis occurs, the cells that store fat cannot survive. When these fat cells are destroyed, many of them are eliminated during the treatment and the rest are later flushed away by the lymphatic system. ReSet Lounge also offers many treatments that support lymphatic drainage and can further support your Cryo T-shock treatment.

Not only does this hot and cold method effectively eliminate fat, but it is also a powerful tool for stimulating collagen and elastin production in the skin. Cellulite is caused by a weakening of the tissues between the skin and muscle. As the tissue weakens, the texture of the fat layer beneath the skin becomes more visible. When collagen and elastin production increases, this tissue becomes stronger, allowing for a smoother, more youthful appearance. Results from a Cryo T-shock session are often visible after only one treatment.

If you're looking for an effective and non-invasive option for muscle recovery, cellulite, and fat reduction, or more youthful skin, look into our Cryo T-shock treatment options to see what’s right for you.

We all want to wake up in the morning,...

We all want to wake up in the morning,...