What is TMJ Disorder and Techniques to Relieve Symptoms 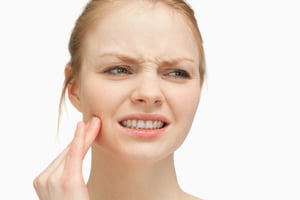 So many people have a tight neck and tight jaws — which lead to clenching or grinding their teeth. This results in not only physical impacts, like pain while chewing and sore joints and surrounding muscles, but it also leads to engaging the fight or flight response in the nervous system.

What is TMJ Disorder?

According to the Mayo Clinic, ”The temporomandibular joint (TMJ) acts like a sliding hinge, connecting your jawbone to your skull. You have one joint on each side of your jaw. TMJ disorders — a type of temporomandibular disorder or TMD — can cause pain in your jaw joint and in the muscles that control jaw movement." This can lead to headaches, migraines, sleep issues, chronic neck, and shoulder pain, as well as anxiety and stress due to the inability to “physically” relax.

How can symptoms around TMJ be alleviated?

There are definitely a few easy ways to release the jaw. Debbie Radvar, of Healthy Integration LLC, sees her clients at ReSet and has great success in this area — so we interviewed her to learn her perspective. The protocols she uses to help with TMJ issues also apply to clients suffering from migraines and neck tension. In her practice, Debbie has found some interesting things over the years in helping many find relief.

What are Common Symptoms You See in People with TMJ Pain?

Proprioceptive neuromuscular facilitation (PNF) is a form of assisted, isometric stretching used to lengthen muscles, dramatically improving range of motion. Debbie has uniquely modified the principles of PNF stretching to form a protocol for resolving TMJ disorders, migraines, and neck and back pain.

This protocol evolved in Debbie’s search to support a client she was working with who had horrendous torticollis (a condition presented as twisting of the neck that causes the head to rotate and tilt at an angle). Debbie recalls that this woman was really tight; her neck muscles were like cement, her neck was stuck in one position, and her tongue was stuck in a spasm on the roof of her mouth for almost a year. It was heartbreaking and Debbie couldn't get this woman’s muscles to release.

One day, Debbie tried doing the PNF stretching she had learned to release the psoas muscle but applied it to the mouth. Amazingly, the client’s tongue immediately released. Eventually, everything else released following that — the throat muscles and the neck muscles.

In learning ways to apply the PNF stretching concepts, Debbie always performs the isometric stretching, for the sternocleidomastoid muscles (from ear to neck) and engages and releases the jaw in every direction. Then she follows with the throat muscles. Before applying the principles of PNF stretching, Debbie could work on someone's neck for half an hour, working on a short muscle, and it would relax, but it didn’t lengthen. So applying an isometric, it slacks the muscle and it lengthens, and improves the range of motion almost immediately.

We asked Debbie: can this protocol help people beyond TMJ disorders?

Back to the common symptoms: If you have two or more symptoms, it can equal a diagnosis. So anyone with discomfort or issues in the head, neck, throat, or tongue area can benefit.

There are so many fascinating things to explore as we learn how connected our bodies are and how one area can impact another! If you are interested in PNF stretching or other Holistic Modalities offered at ReSet Lounge, click the link below.

Magnesium – Why it’s Needed and What Type is Right for You?

The Importance of Calming the Nervous System When Battling Cancer

Cancer has deeply impacted the ReSet...

Magnesium – Why it’s Needed and What Type is Right for You?

The Importance of Calming the Nervous System When Battling Cancer

Cancer has deeply impacted the ReSet...